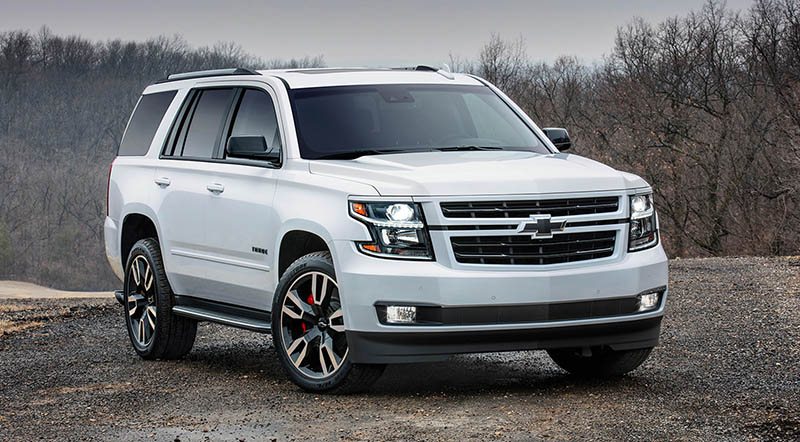 The American automaker Chevrolet has unveiled Tahoe RST in the Middle East on January 18 at the Kuwait Motor Show Auto Moto 2018. The street-performance rally sport truck edition was awe-inspiring during the 2017 Dubai International Motor Show. Powering the truck is a strong 6.2L V8 unit that is also found in the Corvette Stingray. The power is routed to all the four wheels through GM’s all-new 10-speed automatic transmission system. One of the best things about the Tahoe RST is the magnetic ride control suspension, which is taken from the Chevy’s sports cars. The system continuously examines the road ahead every millisecond and generates damping alternations electronically in as low as 5 milliseconds to render exceptional handling with least body roll and improved ride quality. This is the first time the Tahoe embraced the 6.2L V8 engine and it is for a good reason to give it the power it needs. The engine spits out 420 horsepower and 460 lb-ft of torque and is assisted by modern technologies to provide maximum efficiency on different road conditions. These include direct injection, active fuel management, including cylinder deactivation and continuously variable valve timing. From the outside, the RST looks different than the regular Tahoe owing to its aftermarket styling, which renders it a definitely more assertive look. The chrome elements on the outside are switched by gloss-black appointments. The unique elements comprise of body-color grille surround, headlamp eyebrow and door handles; gloss-black grille, mirror caps, roof rails, running board accent, window trim and RST badging, and illuminated black Chevrolet bowties. Lastly, to make sure it looks more demanding, the RST sports unique 22-inch wheels. Other regular facilities to distinguish the Tahoe RST consist of a Borla performance exhaust system and front Brembo six-piston, fixed aluminum calipers finished in red, with brake pads clamping on bigger 410 x 32mm (16.1-inch x 1.3-inch) Duralife rotors. The latest braking system improves the brake pad section and the rotor section by a considerable 84% and 42% respectively to enhance system thermal capacity. Ahmed Soudodi, head of the brand at Chevrolet Middle East, stated: “The Tahoe is one of the most loved large SUVs in the Middle East and the outstanding response the RST edition received at its regional unveiling during this year’s Dubai International Motor Show cemented this fact.” “The Tahoe RST was undeniably one of the star attractions on our stand — a clear indication of how much our customers want this vehicle. And now their wishes are being fulfilled as the most powerful Tahoe is officially launched at the 2018 Kuwait motor show,” he said. “With its street-performance look and increased power, the RST is the most performance-oriented Tahoe yet. Its exceptional styling is backed by equally impressive performance, all the while retaining the presence, and capability that make the Tahoe a firm favorite in the large SUV segment,” he added. Expect the deliveries of Tahoe RST in the third and fourth quarters of this year.