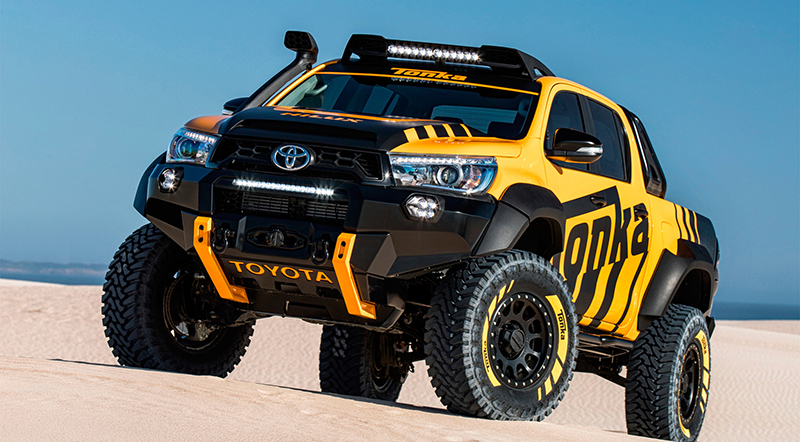 The news about Toyota HiLux Tonka Concept was first disclosed in February when it was announced that both Toyota and Tonka are collaborating to build the ‘ultimate toy truck’ in order to celebrate Toyota Motor Company’s 80th anniversary and 70th anniversary of Tonka.

The concept model is now ready and is being tested in Australia. It is based on the HiLux SR5 DoubleCab, which is powered by a 2.8L four-cylinder turbo-diesel engine. The designers have raised the pickup’s height by six inches, thanks to the new sturdy suspension system which incorporates an upgraded axle and 35-inch tires. The front fascia includes a carbon-fiber hood, an aggressive bumper with a 6 mm thick skid plate and new LED lighting. The huge fender flares help in stopping the mud coming off from the wheels.

At the back, the tailgate has vents to improve the airflow and the bed includes a tube-frame to prevent anything from falling. Extra fuel cans, a fire extinguisher, an axe, shovel and a jack are also present. The Toyota HiLux Tonka concept will not go to production, and will only be used by the automaker as a promotional vehicle. It will be up for display at an Australian dealership later this year.